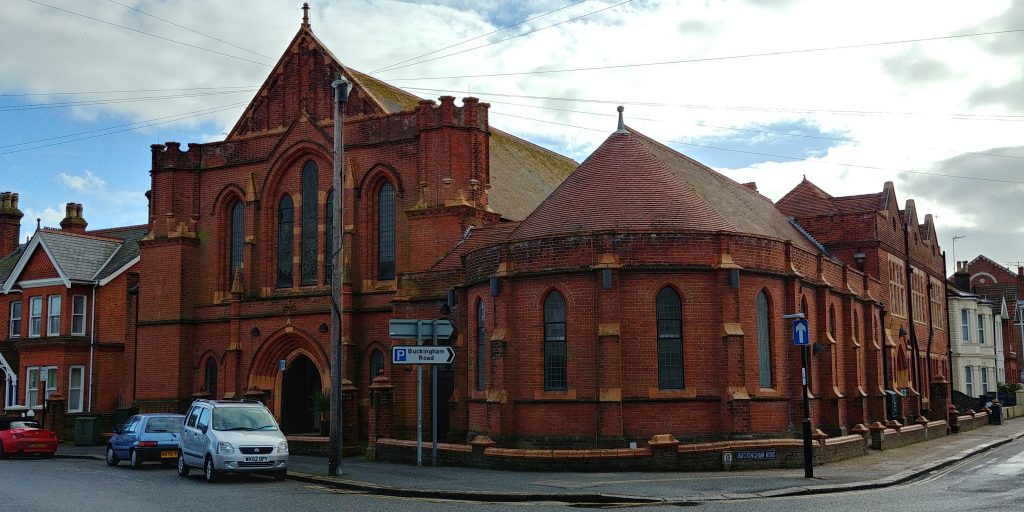 A surprise awaits those visiting Panacea Medical Centre. It is housed in the old Congregational Church which has been converted into a very useful Medical and Surgical facility. The conversion required the laying down of new foundations for the internal elevations of two more floor plans within the original church shell. Internal conversions were very sympathetic to the old architecture and special efforts were made to highlight the old features and bricks. Almost every room has a piece of the history as a reminder of the glory of the church building in its heyday.

The history of the building dates back to 1895 when the Rev. J.P. Perkins took over the pastorate of the Congregational Church. The church had felt the need for a new, larger building and in 1898 the present site in Shelley Road was purchased for £700. After a period of fund raising efforts,  £1,300 was raised and the plans for the new building was prepared by Spurrill & Murray and the contract to build was agreed with Langley & Sons of Crawley. 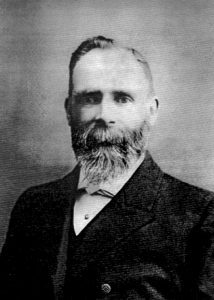 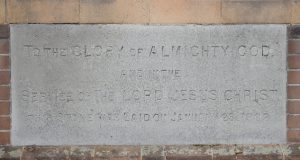 The stone laying ceremony took place on 28th January 1903 by the Member of Parliament, J.C. Rickett at 3:00pm after which a service was continued in the Montague Street Chapel. During the summer a plan to extend the new church building by the addition of a “Lecture Hall” for which a new foundation stone was erected on 14th September by the most generous and enthusiastic member of the church Mrs Treadwell. 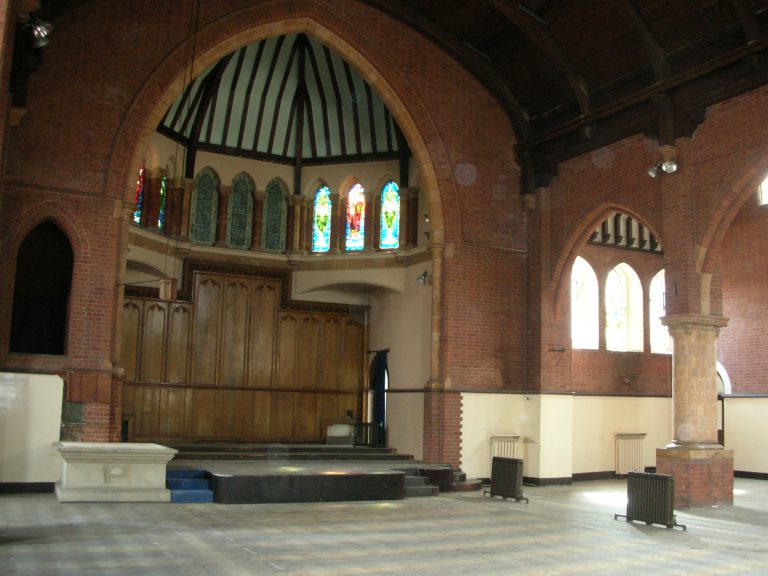 The progress of the building went well and the foundations to the Church Hall were laid on 3rd September 1903.  The work took over 2 months to complete and by the 18th November 1903 the church was completed.

The fine stained glass windows in the apse were given by a family who wished to remain anonymous in 1911. The following year, the low oak screen and choir stalls were presented in memory of his loved wife, by a Mr. B. Calcutt, and that year the remaining debt on the new buildings was cleared. The total cost had been £9,812. In 1914 brought the introduction of new “electric lighting”.

The early part of the twentieth century marks the peak of the protestant movement and the congregation was well supported. The church could seat 650 people and was at one time referred to as the “Congregational Cathedral of West Sussex”.

During the First World War, soldiers stationed locally were given free use of the church rooms for rest, recreation and refreshments.

In 1972 there was a significant change in the church as the Congregational and Presbyterian Churches merged to form the UNITED REFORMED CHURCH. Over time the church saw a decline in the congregation and the building maintenance cost was escalating on account of its age. A decision was made in 2005 to move the congregation from this church in Shelley Road to its sister church in Goring. The building was put up for sale and was purchased by Stereopsis Ltd of Worthing, West Sussex in the merit of reviving the building fabric to its former glory and make use of the space for health and care services. 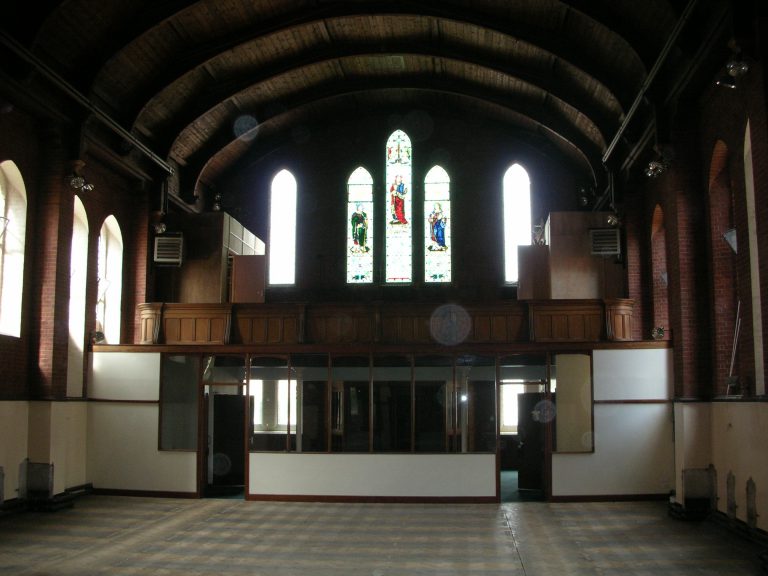 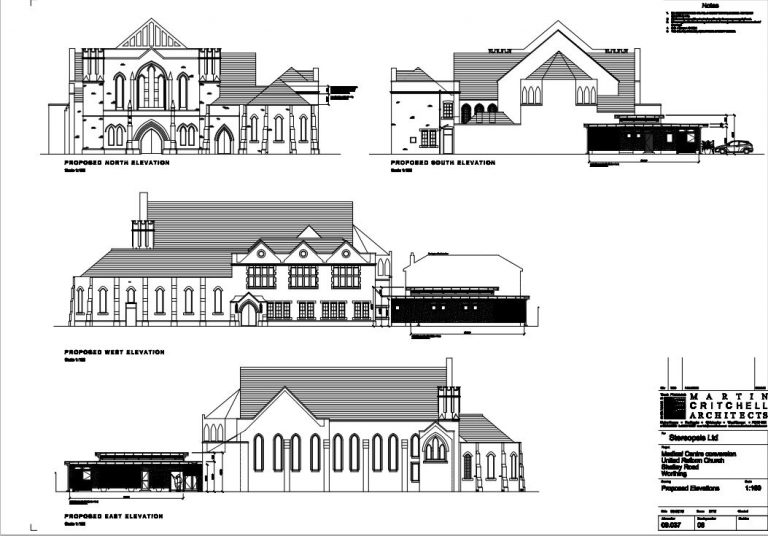 The following few years, the health service in the UK saw a lot of fluctuations & uncertainty while funding was difficult to come by.  In 2012, Stereopsis Ltd made the decision to actively pursue the conversion of the building to a medical & surgical facility under the auspice of Mr Sal Rassam, consultant ophthalmic surgeon.  The plans were drawn by Martin Critchell Architects from Chichester who had experience in church conversions. The contract for the conversion was awarded to W. Stirland Ltd of Chichester. Building work commenced April 2012 and was completed in June 2014.  Panacea Medical Centre was born and opened its doors to the public for the first time on 5th January 2015.

The architecture seems to have been heavily influenced by the Arts and Crafts Movement and may explain the quality and clarity of the stained glass windows. There is also a beautiful stretch of carving of a freeze of grapes this would have finished the top of the  paneling which provided the back drop to the Dias the focal point of the church. There is a panel between the glass panels that has strong influence of William Maurice (the father of the Arts and Craft movement)  but it may have been added later as the detail would have been difficult to make out from the floor of the church, but it is in keeping with the architectural style of the church. His work was influenced by the old testament from the Book of Ezekiel which describes itself as the words of the Ezekiel ben-Buzi, a priest living in exile in the city of Babylon between 593 and 571 BC. 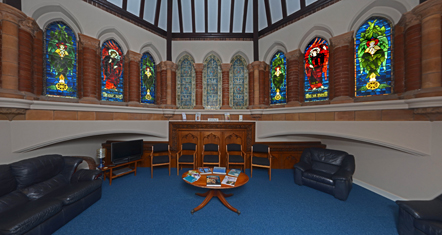 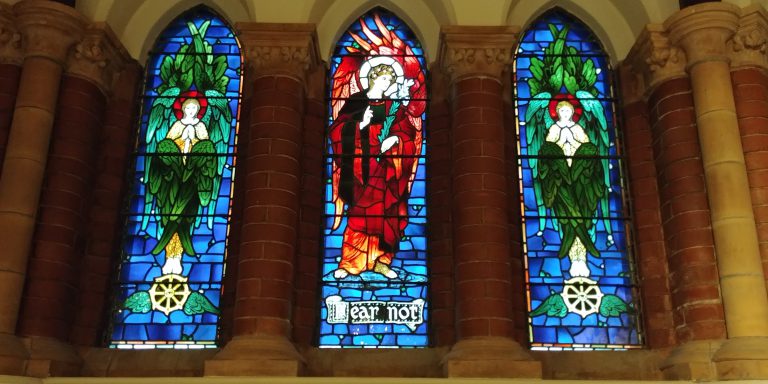 The stained glass windows in what was above the chancel is now in the designated waiting room features need special highlighting. There are four panels depicting Cherubim which are drawn from the first chapter of the book of Ezekiel. In his description the Merkaba or Vehicke of God is a throne of sapphire upon which is seated Asonai and supporting and drawing it are four cherubim standing upon the four wheels of the chariot in appearance like Chrysolite. Their whole body, necks, hands, wings and the circles are full of eyes. The four wings enabling the creatures to move in any direction without loosing cohesion and can cover the four corners of the universe, also each creature had four faces one the face of a man the others were faces of an ox, a lion and an eagle. The four creatures symobliseing the Ox for Earth, the Lion for Fire, the Soul depicted by the human face and the Eagle for Wind.

The two angelic being depicted in bright colours in contrast to the Chrubim are the two angels that greeted the disciples when they went to visit the tomb in which Christ lay after the crucifixion. These Angels in the gospel account are described as being clothed in radiant white, but I suppose the artist wanted to inject some colour and perhaps extra significance to them. Is he suggesting that they may have been the two Arch Angels, Michael and Gabriel. Michael who was the warrior Angel and Gabriel the messenger Angel. For the message they proclaimed changed the story of the crucifixion of Jesus from a piece of political chicanery, to a fulfilment of all the old testament prophecies and of eternal significance changing the course of history. 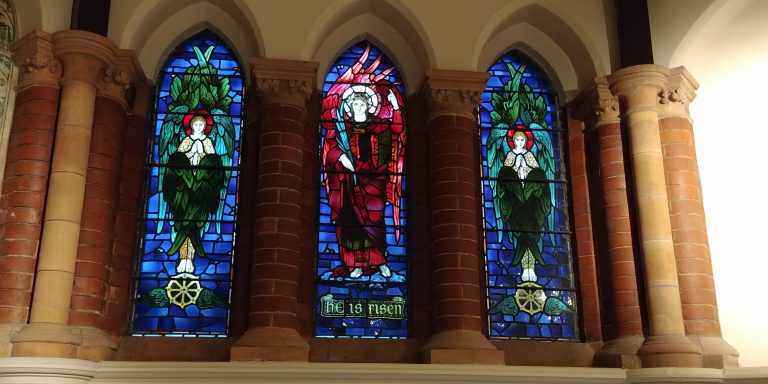 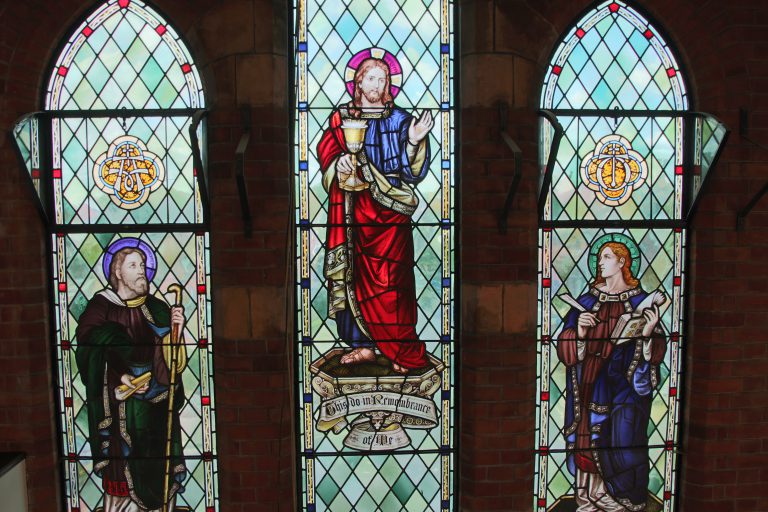 The stained glass panel over the entrance to the church here again the artist has managed to capture and even extend the theme, for he depicts two of the most significant characters of the New Testament the apostle Paul who was deeply entrenched in the old Judaism until his “Damascus Road” experience, then to become ,the, greatest exponent of Christian theology, however theology on its own is not sufficient of itself so, he is balanced by the inclusion of the Apostle John the one who’s emphasis was on the supremacy and eternal quality of the love of God and it’s requirement upon all believers to demonstrate the same in their daily living. Paul accepts this vital precept when he wrote the thirteenth chapter of his epistle to the Corinthians, possibly the most complete description of love in action ever written and, probably the most read passage of scripture at weddings. John also saw the vision of the Cherubim.